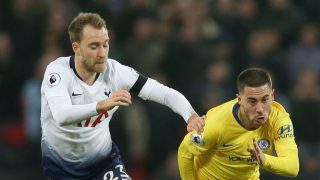 Manchester United and Chelsea reportedly look set to scrap it out for the transfer of Tottenham playmaker Christian Eriksen.

The Denmark international is yet to sign a new contract with Spurs, putting his future in real doubt going into the summer.

And according to the Daily Express, it now looks set to be a two-way fight between United and Chelsea for Eriksen’s signature as Real Madrid seem to have cooled their interest in him.

Eriksen would be a dream signing for the Red Devils, particularly with Juan Mata another player nearing the end of his contract and perhaps being in need of replacing with a younger player anyway.

It’s previously been suggested by the Independent that Eriksen would cost around £100million, which is just about the going rate now for top attacking players.

The message from us is simple – if there’s a chance of getting him, even if it is for that kind of price, he’s an absolute must for us!

MUFC may look a great deal better under Ole Gunnar Solskjaer, but the need for a world class number ten player like that remains.

City have David Silva, Chelsea have Eden Hazard, even Arsenal have Mesut Ozil – United lag behind their rivals in that area and Eriksen would be a dream purchase, with a top performer like that rarely looking such a realistically available target.