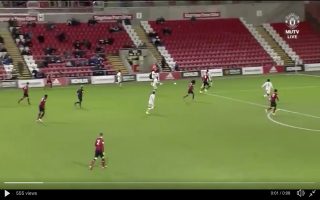 Scott McTominay produced a moment of magic for the United under 23s last night, whilst our eyes were all focused on the first-team’s battle with Arsenal.

The 6ft 4in giant showed surprising twinkle toes when he expertly went past one of PSG’s defenders before picking out a spot and slotting the ball into the back of the net.

This will cap off a great week for the 22-year-old, the youngster extended his contract with the club until June of 2023 on Monday.

It’s clear that the Scotsman was thrown into first-team action too soon under Jose Mourinho, but he’s now been given the chance to properly develop and it looks as though he’s reaping the rewards already.

Check out the midfielder’s goal below:

United won the clash 3-0 thanks to McTominay’s opener and a first-half double from Tahith Chong.

McTominay has made 33 appearances for the first-team and whilst he may not be in the picture right now, he could develop into a handy first-team player in the future.

We might even see McTominay used further up the pitch, I mean look at what he did last night, a more attacking role could better the Scotsman.