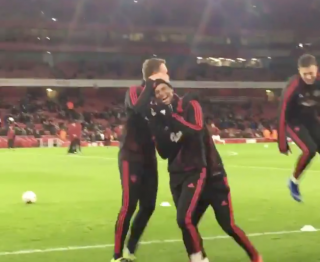 As the players warmed up for the Arsenal clash on Friday night, Marcus Rashford sent his Man Utd teammates crazy with this brilliant bit of skill.

The 21-year-old will undoubtedly be in confident mood given his recent form, scoring in four consecutive Premier League games to play a major role in Ole Gunnar Solskjaer’s eight-game winning streak since taking charge.

SEE MORE: ‘In our history against Arsenal’ – Solskjaer on exploiting weakness and reacts to Man Utd win

Clearly, the pair are working well together and Rashford’s even got time to pull off some stunning tricks as seen in the video below as he leaves Fred in all sorts of trouble with his quick feet.

It’s difficult to decide which is better, the skill and nutmeg or the reaction from the United players, as they were loving Rashford’s showboating with Juan Mata and Phil Jones in particular getting involved.

Fortunately it was all captured on video so we all get to enjoy it too, and it’s hoped that Rashford can continue to show this type of confidence moving forward and maintain his scoring run to help fire us back into the top four sooner rather than later.

Marcus Rashford sending Fred back to the Ukrainian League! 💀😂