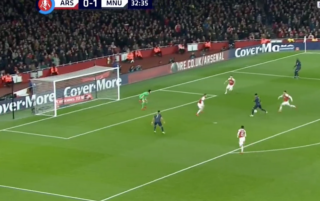 Jesse Lingard was on hand to double Man United’s lead against Arsenal this evening, as the England international applied the finishing touch to a fine counter attack from our lads.

United were already 1-0 up thanks to a fine finish from Alexis Sanchez, with Lingard then adding another to our goal tally with a fine finish late in the first half.

The goal came after a ball to Romelu Lukaku saw the Belgian blitz down the right wing before squaring the ball to Lingard, who applied the finish to hand our lads a 2-0 lead.

You can check out the goal below. Superb play from Lukaku, that!