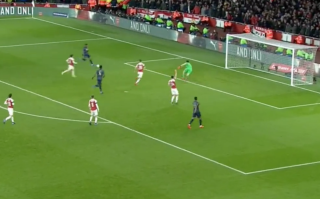 Anthony Martial was one hand to apply the finishing touch to a fine counter attack from our lads this evening to put us 3-1 up against Arsenal in the FA Cup.

We were already 2-1 up going into the final 10 minutes, and Martial’s finish from a fine run from Pogba all but put our name into the hat for the 4th round draw.

The goal came after Pogba carried the ball a good 60 yards towards the Arsenal area, with the Frenchman’s shot then being parried by Petr Cech to Martial, who slotted home with ease.

You can catch the goal below. That run from Pogba was absolutely brilliant!