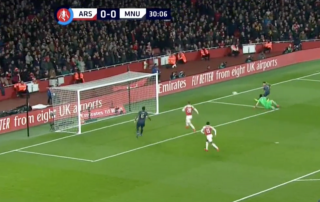 Alexis Sanchez scored a fine finish from a very tight angle to hand us a 1-0 lead against Arsenal in our FA Cup clash this evening.

Sanchez returned to haunt his former side this evening, as the Chilean international scored a great goal to put us ahead against the Gunners.

The goal came after a fine defence-splitting pass from Romelu Lukaku put Sanchez through on goal, with the winger rounding Petr Cech before slotting home from a very tight angle.

You can check out Sanchez’s sublime goal below. Great composure from the Chilean!