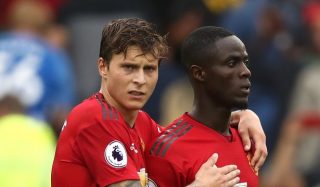 Manchester United have reportedly ruled out allowing Eric Bailly a loan transfer to Arsenal this January following an inquiry from the Gunners.

The Daily Mail claim Arsenal tried their luck with an approach for the Ivory Coast international after his lack of action in the United first-team for much of this season.

Bailly is an underrated player who surely deserves more opportunities at Old Trafford now if we’re not planning to let him go.

Mundo Deportivo report that the north Londoners now look unlikely to take the Spain international on loan, and all in all this has to be good news for Man Utd.

We’re currently level on points with Arsenal, behind them in the table only on goal difference, and given our form under Ole Gunnar Solskjaer, catching them between now and May and perhaps even pipping Chelsea to a top four spot is a very realistic goal.