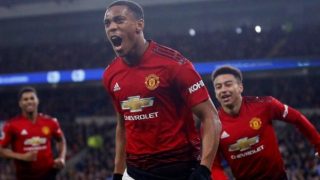 There is no denying Ole Gunnar Solskjaer has lifted the mood at Old Trafford.

The Norwegian was appointed interim manager at Manchester United a month ago, and Anthony Martial has become the first player to back Solskjaer to get the manager’s role on a full-time basis.

Solskjaer returned to United where he previously spent 11-years, replacing José Mourinho until the end of the season. But, after winning his first six games in charge, he has now become a candidate for managerial vacancy.

While he holds an impressive record as caretaker manager in terms of a perfect win streak, Solskjaer has got the best out of players weren’t reaching their potential consistently under Mourinho, with Martial, Paul Pogba and Marcus Rashford all doing tremendously.

United are now in with a real chance of finishing in the top four this season, an objective that seemed impossible not too long ago.

In an interview with TV2, translated by Sport Witness, Martial becomes the first United player to publicly back Solskjaer for the job beyond this season.

“At the moment everything goes very well, all the players are happy. So if it goes on like that, why not?”