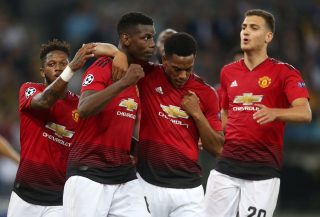 Manchester United midfielder Paul Pogba is one of the most fouled players in the Premier League so far this season, but Eden Hazard tops the pile by some margin.

The Belgian, who gets a good kickin’ most weeks, mainly because he’s a constant threat for teams, has thus far attracted 66 fouls in the league this season.

The switch in style of play at United should see United play with more possession throughout the second half of the season, so we can foul counts to rise, especially if Marcus Rashford and Anthony Martial keep running at defenders with blistering pace.

Pogba is already showing the damage he can inflict on teams when given permission to express himself in the final third.

Since joining from Juventus in 2016 for £89 million, as reported by BBC Sport, Pogba struggled to justify becoming the most expensive midfielder in the world at the time.

Only now are fans beginning to see the true side of Pogba after being deployed in a more attacking position.

The World Cup-winner was asked to carry out more defensive duties under former manager José Mourinho, who is held responsible for bringing the France international back to Old Trafford. It didn’t help that the Portuguese tactician manages his teams to play with a conservative approach.