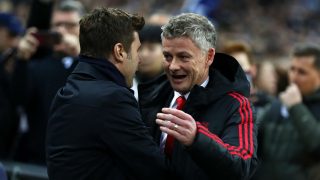 Well, well, well. Look what happened on Sunday. Manchester United’s caretaker manager beat the man that is hotly tipped to take over in the summer. The cat is very much among the pigeons.

When United’s hierarchy appointed Solskjaer they couldn’t have envisioned six wins out of six. Sunday was meant to be ‘Ole’s big test’ but truth be told, Ole has been tested all the way through his recent tenure.

To start away to a team that you managed and had bad memories with was only the beginning.

Making Old Trafford feel like a fortress in a short space of time and over coming tricky away ties to Cardiff, Newcastle and now Spurs you have to give this man credit.

The tactics in a lot of away fixtures under José Mourinho were defensive. The team was sent out not to lose. Not to win, to not lose.

Spurs have a lot of players that can hurt you all over the pitch.

Solskjaer has shown his versatility as a manager and not only adapted his style for different teams but also exposed holes that others have failed to do so.

Yes, United rode their luck in the second half (and also have a goalkeeper that seems unbeatable at times) but its the attitude the players have displayed that has changed the course of our mentality.

Ultimately, Ole’s reign will not be decided by a result against a rival but where he finishes in the league.

Level on points with Arsenal, six behind Chelsea and everything is looking much brighter than before.

So what about Mauricio Pochettino?

As I said, one result is not going to define his future.

Looking at his credentials it’s hard to ignore his talent and admire the job he has done with Tottenham Hotspur. On a significantly smaller budget than the top six sides he has made his squad an all round force.

Key players have, of course, played their part but you could say that about any other successful club. You need the right players but getting the best out of them in the right positions has been Pochettino’s strongest asset.

His only knock is that he hasn’t won any trophies in his time at the club and with what he has built it really is time to change that.

The Reds biggest obstacle trying to get the Argentinian is dealing with Daniel Levy.

The financial package would be astronomical and Levy would drag any negotiations on and on which could hamper our pre-season and summer transfer targets. Can we really afford unrest and uncertainty at the beginning of another summer?

Also, do we really need to be held to ransom when the answer we are looking for is already at the club?

Gary Neville said on his Podcast, as per Sky Sports: “No one should ever be allowed to enter Manchester United’s training ground or football club ever again and shape their own philosophy.

“That is done. Manchester United’s philosophy is so deep, it’s so meaningful to that club. It’s like Barcelona’s, it’s like Ajax’s.”

There is no doubt that having someone like Mike Phelan back at the club has had a positive impact. Reminding the players of the traditions and what it means to play for The Red Devil’s seems simple in theory.

By having a coach that has the experience and aura has been a timely nudge this squad has badly needed.

Let’s not get carried away though, this is only six games and there is so much more to play for.

Tough games are ahead and PSG in the Champions League and away to Arsenal in the FA Cup will give us a much more clearer idea of where we go from here.

Solskjaer‘s influence has been instant, exciting and has brought back a feel good factor.

All of this has to be harnessed and maintained and that’s where the real challenge lies for the club.

For me, it’s a straight choice between Ole Gunnar Solskjær and Mauricio Pochettino.

Is it the guy who has the traditions and DNA of the club in his bones?

Or is it the guy who will represent a total reset of the club?

It’s a gamble either way you look at it. Ole is riding a crest of a wave at the moment and almost has a free pass until the end of the season.

He is dealing with what he has at his disposal and doing a fantastic job.

The real test is when that grace period has passed and he has a squad he can mould in to his own image. If he gets that chance.

Will the initial nostalgia and positive outlook fade? Will United go back to underperforming?

Appointing Pochettino would signal another new era at the club. We have had a few of those and history shows it didn’t work out.

Would the club expect Pochettino to work to a strict budget as a consequence of the financial package it would take to acquire him?

Is the appeal that he can work under those circumstances?

Many questions and the future of The Reds, for me, was brought in to sharper focus after the weekend.

Zidane, Blanc and Southgate are not credible candidates in my mind. If United really want to push forward our future needs to be defined and deliberate. United may fall but let’s get behind a philosophy that’s either steeped in the club’s traditions or signals a new era we can be excited about.

The club know it’s a defining decision and must throw everything behind what they decide. For too long, we have dithered about our direction and this summer feels like the biggest in a long time.

Whoever is chosen, let’s hope the fans win.