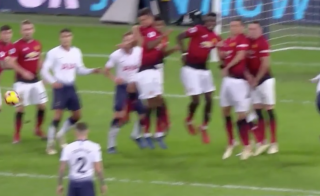 Manchester United were leading Tottenham 1-0 at this point and Victor Lindelof couldn’t contain himself as attempt on David de Gea’s goal dragged wide.

It’s was the response of a player working his arse off to ensure De Gea kept a third consecutive clean sheet.

Although, the Spain no.1 was extremely busy for the last half hour of the match but through no fault of Lindelof, who was brilliant again at the back.

There came a point in the second half that Spurs won three dangerous free-kicks in quick succession. A different player stood up to take each of them, including Kieran Trippier and Harry Kane.

However, it was Christian Eriksen’s free-kick that made us laugh the most…

The Dane’s effort failed to threaten De Gea as it dragged wide to left. Lindelof then reacted as if he’d gone and scored a winner.

Priceless stuff from the Swede. You can tell he’s kicking on and cares about this team.