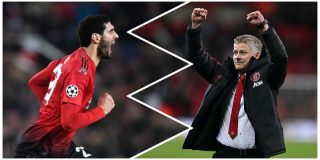 Manchester United midfielder Marouane Fellaini is on ‘borrowed time’ under Ole Gunnar Solskjaer and could leave on loan before the January transfer window ends.

That’s according to talkSPORT host Jim White who claims to have heard from an Old Trafford insider.

The Belgium international has only played 3 minutes as a substitute under Solskjaer and doesn’t look to be part of the interim manager’s plans between now and the end of the season.

United have won every game under the Norwegian and are playing with attacking intent regardless of who they face. A 1-0 win over Tottenham saw the Reds gain momentum in the race for a top four finish.

White revealed Solskjaer is not happy with Fellaini’s attitude, therefore, he could leave on loan.

“It’s now become apparent Marouane Fellaini can go amid talk that Solskjaer is not too happy with his attitude,” he told talkSPORT.

“Fellaini has been on the outside looking in since Mourinho departed the scene.

“And it’s my understanding this morning he could go on loan in this window and so might McTominay.

“It’s clear that Fellaini, specifically Fellaini, is on borrowed time.”

“Players are in suits, as Solskjaer wants them to feel they represent United.”

“Fellaini can go, he isn’t happy with his attitude. He’s on borrowed time.”

Scott McTominay may not be good enough for this level but that doesn’t mean Solskjaer won’t help the Scotland international better himself by getting more game time.