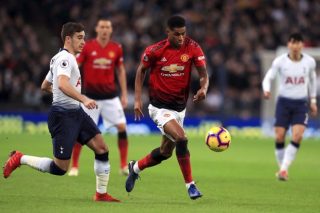 A change in tactics by Ole Gunnar Solskjaer ensured Manchester United beat Tottenham at Wembley, according to Marcus Rashford.

United started with a front three with Rashford and Anthony Martial taking up the wide positions and attacking Spurs from either side, while Jesse Lingard played centrally, in almost a similar role to Liverpool’s Roberto Firmino. The Guardian’s Barney Ronay describes it brilliantly as the “forward-forager role”.

However, since Solskjaer’s appointment United have played with Rashford through the middle flanked by Martial and Lingard on the wings, but the latter was asked to perform in a deeper role against Spurs which saw the tactical battle won inside the first-half.

Rashford opened up on the different system which resulted in United altering their tactics for the game and come away with a win.

“We played a slightly different system, but against a team like this it was needed,” Rashford told Sky Sports, as quoted by the Manchester Evening News.

“The other teams we have played have played pretty much the same system so today it was a different game and we played differently and the tactics changed but that is what we have to do to be one of the top teams, we have to adapt. And we keep pushing and improving.”

The squad was brought on a warm weather training camp to Dubai last week, presumably in attempt to boast morale in the dressing room and to keep everyone upbeat for the remainder of the season.

It was also a matter of good timing with United knocked out of the League Cup, knowing Spurs would have their pre-match preparations interrupted by a semi-final first-leg tie against Chelsea, which they happened to win 1-0.

Solskjaer took the chance to work on tactics with his players in sunny Dubai.