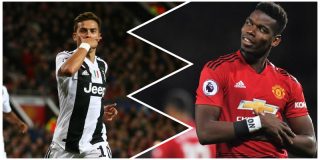 Paulo Dybala has admitted he would love to play alongside Paul Pogba again.

The Argentine playmaker would be an addition to most line-ups in world football, with Real Madrid recently linked the Juventus star as a possible alternative to fill the void left behind by current teammate Cristiano Ronaldo, as reported by The Express, who think Florentino Perez will use Spanish midfielder Isco as bait in the swap deal.

Manchester United midfielder Pogba has also been linked with a move to the Santiago Bernabeu in recent months, as per Goal, but the Frenchman was teammates with Dybala during the 2015/16 season in Turin.

The friendship remained strong even after Pogba returned to United, and Dybala has never ruled out the possibility of the duo playing together again.

Dybala got his name on the scoresheet when Juve secured three points in a Champions League group match at Old Trafford in October. If his performance was an audition, it deserves to be considered a successful one.

He has teased the prospect of linking up with former teammate Pogba again.

“I’d always like to play with someone of his level,” Dybala told Telefoot, as quoted by the Manchester Evening News.

“Everyone would like to have a player with the qualities of Pogba in their team, but whatever decision he makes, I will always wish him the best.

“As for myself, I have changed my style of play recently and learned so much by working with great champions.

“It’s quite a mature and experienced squad in Turin, but that really helps a young player like me, because you learn and absorb their mentality.”

Talk of champions may put United off the map in our current state, but if Ed Woodward begins to recruit properly we won’t be far off.

Dybala is a player who excites but we’re unsure he’s what United should be prioritising this summer. A big chunk of the transfer kitty must be spent on the defence, while making sure there’s a significant amount left to bolster our midfield.

Fred may have signed last summer but more work is to be done. The club must realise that Nemanja Matic’s legs won’t last forever and we need more quality alongside him than Ander Herrera, who should be kept as a valuable squad player, still used in big games where he carries out duties exceptionally.