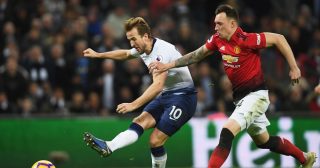 How comfortable would Manchester United be able to beat teams like Tottenham with better defenders?

Victor Lindelof stood out like a sore thumb on Sunday at Wembley and has been getter better by the week. If this season has proven anything, it’s that there’s a good defender waiting to hatch out of the Swede and the club should be working on finding the right partner for him to develop into an even better player.

United got the job done against Spurs after winning the tactical battle inside the first hour. Then, the hosts asked questions of the world’s best no.1 David de Gea, who was prepared to answer them all and provided a goalkeeping masterclass.

But several fans, who despite being happy with the win are demanding more, by pushing their view on social media that a new central defender is required to take their team to the next level,

Phil Jones was singled out for criticism following another below-par display.

However, Solskjaer will have a decision to make next weekend when United host Brighton, with Eric Bailly returning from suspension. Many feel he has what it takes to become part of our defensive foundations, though fears have grown because the Ivory Coast international spends too much time out injured and hasn’t really kicked on from his debut season at the club in 2016/17.

It doesn’t help the Englishman or his compatriot Chris Smalling that United are constantly being linked with Napoli defender Kalidou Koulibaly, as reported by ESPN, stating the Reds will wait until the summer to try sign the Senegal international.

Jones was blasted as a “passenger” by one fan.

Phil Jones being bullied by Kane. Replace him with a Koulibaly #MUFC #TOTMUN

Me when Jones is close to the ball #mufc pic.twitter.com/bexoqGVfRR

Phil Jones makes me so nervous man. Just ship him out and bring in a Koulibaly/Skriniar ffs

Lindelof keeps mopping up behind Jones. We need Koulibaly.

Phil Jones cannot be the long-term answer at CB. When does Smalling get back? 😅

Phil Jones is a passenger. Hes lucky that he has De Gea and Lindelof next to him

It goes without saying Koulibaly would make a huge difference at United.

And, if United decide to penny pinch rather than go all out to fix the issue, it’s likely that we’ll be saying the same things next season.

As much as it hurts to say this, Liverpool showed great example by spending big on Virgil Van Dijk. He’s changed the side for the better (questionable) along with Brazilian goalkeeper Alisson.