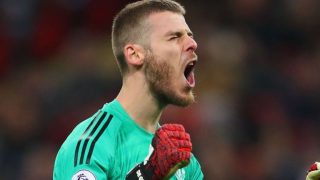 Jesse Lingard speaks on behalf of everyone at Manchester United when expressing his wish for David de Gea to stay.

The England international spoke to the media follow his side’s 1-0 win over Tottenham on Sunday.

De Gea put in a man of the match performance at Wembley, saving a series of second half attempts on goal to deny the likes of Toby Alderweireld, Harry Kane and Dele Alli.

In November, the club activated the one-year option in the 28-year-old’s contract, as reported by The Guardian. It keeps him at the club until 2020 but that’s not long enough when you’re trying to keep hold of the best goalkeeper in the world.

Lingard has urged De Gea to stay at United beyond the triggered one-year extension.

“We want him to stay. Having a keeper like that gives you extra confidence. He’s a great goalkeeper,” Lingard said, as quoted by The Mirror.

“It’s a normal day for him! He was excellent. They looked like scoring but he’s saved us. We see that in training and it pays off when it comes to the big games. Some of his saves, you’re like, ‘Oh my god’. He’s one of the best keepers in the world, if not the best.”

Our hopes for next season and beyond rely somewhat on De Gea.

Can you imagine where we would be in the table this season and previous had he left for Real Madrid when the Spanish giants came knocking hard in 2015 until the fax machine played up, as reported by ESPN.

Madrid have since ended up with Belgium No.1 Thibaut Courtois.