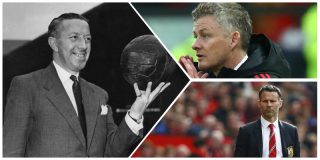 As fans of Manchester United we have been spoiled. The reign of two managers in our history that have lasted for 25 and 26 years has meant a certain degree of stability throughout. Fans had gotten used to a situation where many clubs changed coaches on an almost yearly basis. But we also have had situations where caretakers have needed to take place.

Our first caretaker manager went all the way back to the 1926-27 season. And occurred in mysterious circumstances. The Football Association declared on 7th October 1926 that then manager, John Chapman, had been suspended from “taking part in football or football management for improper conduct in his position as Secretary-Manager of the Manchester United Football Club”. Given that this was the late 1920’s, such “improper conduct” could have amounted to anything. No reason or solid definition was ever provided, however.

Stepping into the breach until the end of the season was Clarence Hilditch. The half-back had played mainly in the Cheshire Leagues with the likes of Altrincham before joining the reds. A former captain, he was an important member of the team. He was asked to lead the side until the end of the season. This was in a player-manager role. Form remained patchy throughout the campaign though. The side suffered more defeats than celebrated wins (15-13). In a curious pointer towards our current manager, they faced up against a Reading side from a league below in the FA Cup third round. On this occasion, the second of two replays saw Utd bow out of the competition.

Upon stepping aside to allow for the appointment of Herbert Bamlett as permanent manager, he resumed his full-time playing career. This continued until his retirement in 1932. During his time with the club, he managed to accrue 322 league games, whilst notching 7 times. Because this period was a time of struggle for the club, he is perhaps relegated to something of a forgotten man. This is unfair as he seems to have been a solid and reliable defender. Hard to play in a side which is generally struggling. Plus, the years between years between the wars are generally overlooked by most clubs

The second occasion where a temporary manager stepped in occurred during the club’s darkest hour. Jimmy Murphy had been assistant manager for a number of years after helping to coach the group of players who would eventually become known as the ‘Busby Babes’. And the man in question was highly in demand. As manager of the Welsh national team, he had managed to secure their first ever World Cup qualification (and only to this date) in a play-off victory against Israel. In a time of celebration, he was unaware of events happening elsewhere with the club he was assistant manager of. Following a victorious European encounter with Partizan Belgrade, British European Airways flight 609, crashed on its third attempt. In the aftermath, many aboard would lose their lives. 23 in total died, including 8 players.

The club was shaken to its very core. In the midst of funerals, and an overriding feeling of shock and devastation, the reality was that the day to day aspects of the club had to continue. It would have been an insult to those who lost their lives to have just given up. Utd were defending league champions and had a semi-final of the European Cup to look forward to against AC Milan. Before the crash, all talk was about their possible chance to win a domestic double, having last the final the previous year. Now it was all about survival. Matt Busby was among those still in hospital, so somebody had to step into the breach. It could only have been one man. Since the majority of the squad was lost or severely injured, the immediate concern was to put together a squad to last the end of the season. He employed his shrewd coaching knowledge to support in this sense. The FA relaxed its regulations concerning loan deal to allow him to patch a side together. The out swell of emotion that greeted their first game at Old Trafford against Sheffield Wednesday was palpable. It was summed up by a programme missing any team details. The opposition was beaten before they entered the turf.

Notable introductions to the side included youngsters who would become important players in the future such as Shay Brennan and Mark Pearson. Dennis Viollet would demonstrate his promise by scoring 23 goals. Despite their league challenge dropping away, and a defeat to Milan, they swept away all in front of them to reach the FA Cup final. Defeat to Bolton in controversial circumstances could not take away from his achievement. He stepped aside once Busby regained his fitness and stood by his side as the reds triumphed at Wembley ten years later. Despite job offers from the likes of Juventus, Arsenal and even Brazil, he remained true to Utd. His scouting under Tommy Docherty led to the signing of Gordon Hill and Steve Coppell. He was honoured after his death by having the best young player award named after him. A certain Welsh lad would be winning that in the future.

Oddly enough, it was his superior who was to next step into the temporary hotseat. Wilf McGuinness had stepped up from reserve team manager into the top job following Busby retiring at the end of the 1968-69 season. Extremely young at this point (31 years old), he faced a major challenge. The team was beginning to age considerably and many of the players found it hard to deal with anyone other than Sir Matt in charge. Reaching two cup semi-finals was decent enough but they were never in the title shake-up. A disastrous run of only 5 wins in the first 23 games saw him lose his job. Busby took over for the remainder of the season until another manager was hired.

Aston Villa prevented him from winning silverware that year after beating them in the League Cup semi-finals. Middlesbrough put paid to their FA Cup ambitions. League performances did pick up and they eventually finished eighth. The likes of Alan Gowling, Willie Morgan and Carlo Satori provided some younger faces, but it was still predominately the older guard who made up the side. Busby left again at the end of that season after the club appointed Frank O’ Farrell.

It was a number of years before the next caretaker appeared. Mangers were either hired during the close season or quickly after the departure of another. Nearly 40 years had passed in fact. Perhaps having a manager for 26 years says that also. But it was in the aftermath of the retirement of Alex Ferguson which may have contributed towards the departure of his successor. The 2013-14 season is not one that is remembered fondly in the minds of Utd fans. Heavy defeats against primary rivals, one of the worse ever title defence and a pitiful home record weighed heavily against him. A rare highlight was the comeback victory in Europe due to the finishing of Robin Van Persie and probing of player-coach Ryan Giggs. Time was ticking however.

A 2-0 defeat against his former club left Utd stalling in seventh place and adrift of the champions league places. Despite a five year contract, and the title of ‘the chosen one’, the Scot was sacked. Giggs was entrusted with the job for the remainder of the season. In terms of fixtures, it was relatively kind. The primary concern was to instil a degree of confidence into the side and maybe to qualify for the Europa League. His first game saw Rooney and Mata score twice apiece to batter soon to be relegated Norwich. His next game put paid to any sort of European hopes. Relegation threatened Sunderland rocked up and came away with a 1-0 victory. His final home game saw them defeat Hull City with two goals from James Wilson. Reminding many of when he was known as Ryan Wilson. Needing Spurs to lose to have any chance of Europe, Utd could only draw with Southampton.

Ryan was to stay as assistant manager under Louis van Gaal despite some asking for him to be named as permanent manager. The sacking of the Dutchman, and the arrival of Jose, led to his departure. He was mentioned in terms of available positions at many clubs in the meantime, such as Swansea, but his next job was that of the Welsh national side. He has started extremely well in the national league thanks to home and away victories against Republic of Ireland. Failure to gain promotion to the main table may have stung him. The promise of young talent such as Harry Wilson, Ethan Ampadu, Ben Woodburn and Tom Lawrence shows a brighter future for the Welsh. If he does well with them, then who knows.

Ole has a major job on his hands. Hopefully he can create a little bit of history for himself. Given his beginning, we are all behind him.