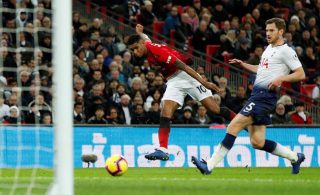 Marcus Rashford has given Manchester United the lead over Tottenham Hotspur at Wembley.

A world-class through ball by Paul Pogba picked Rashford out in a dangerous position and Spurs goalkeeper Hugo Lloris was too far away from the ball to make a save.

If caretaker manager Ole Gunnar Solskjaer can make it 6 wins from 6 games, he will become a serious contender to get the United job on a full-time basis, especially if he can take three points from Mauricio Pochettino.

The game had been a close encounter prior to the goal with both sides having attempts on goal.

But United hit home when it mattered most – right on the brink of half-time.

Pogba deserves credit for picking out a pass that saw Spurs ultimately vulnerable at the back, with too little numbers to protect Lloris with Rashford entering the box.