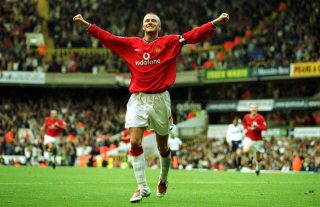 “Lads, it’s Tottenham” an iconic Premier League quote, highlighting the history between the two sides. Let’s take a look back on the history of clashes with the North London side ahead of the trip to Wembley.

The first fixture between the sides came in 1899 FA Cup, the match ended 1-1 and Manchester United (then Newton Heath) were knocked out in the replay in a thrilling 5-3 encounter at Bank Street.

It would not be until 1910 when the Red Devils would beat Tottenham, and they would do it in style. An emphatic 5-0 in the old division one with J Edward Connor, Arthur H Hooper, Billy Meredith and Charlie Roberts (x2) scoring to easily dispatch of the North London side.

The first European encounter between the two sides was a two legged affair in the second round of the Cup Winners Cup in 1963. Tottenham, the holders of the competition comfortably won the first leg 2-0. However, an outstanding second leg performance from Manchester United lead to the Red Devils going through with David Herd and Sir Bobby Charlton scoring doubles.

In more recent memory, in September 2001, Sir Alex Ferguson led Manchester United to a heroic fightback at White Hart Lane. After going 3-0 down in the first-half through goals from Dean Richards, Les Ferdinand and Christian Ziege, Sir Alex’s half time team talk inspired his side to turn the game around. Simply stating “Lads, it’s Tottenham,” to his players, the floodgates opened in the second half with Manchester United scoring 5 unanswered goals to win the game.

Last season saw the sides clash at Wembley for an FA Cup final. Tottenham struck first through Dele Alli, but a trademark Wembley goal for Alexis Sanchez and Ander Herrera saw the Red’s come from behind once again to beat Tottenham at what has been their own patch for almost two seasons.

In what seems like a decade ago, the most recent encounter with Tottenham makes for grim reading, a 3-0 defeat at Old Trafford with goals from Harry Kane and one time transfer target Lucas Moura (x2) humbling Mourinho’s men.

Manchester United, holds a significantly better record than Tottenham in the head to head statistics, with the Red’s winning on 90 occasions, losing 52 times and drawing 48. This weekend lets hope Ole Gunnar Solskjaer can continue his turnaround and claw back some points in the race for European football.

RELATED: The man Solskjaer should call upon at Wembley, with remarkable record against Spurs