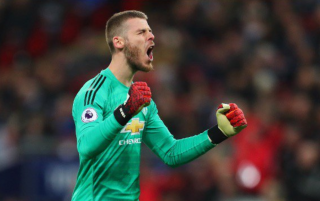 This time at Wembley against Tottenham and it looked like the break in Dubai left every player fresh and prepared to take on this season’s title contenders.

It was a class performance. Here are our player ratings:

Spurs failed to register a shot on target during the first half and De Gea was largely untroubled but he was soon called upon after the break to make two excellent saves in quick succession from Kane and Alli to preserve the slender lead. Found himself a busy man in the second half. Excellent. Lost count of saves. Man of the match.

Quiet. Didn’t do much wrong but nothing special either. Better than Antonio Valencia. Got forward when he could. Did OK.

Not his best game but not his worst either. Kept busy by a talented Spurs team, and the shutout was mainly down to De Gea. Worked hard and dealt competently with anything that came his way.

Shaky. Struggled against Dele Alli but composed himself to help United to a vital win despite heavy pressure at times. A third clean sheet in a row.

Solid. His sizzling early season form may have dipped a bit but has remained consistent and now made the left back spot his own. Deserves credit for that. Had his work cut out at times but found himself comfortable as Spurs tired by the end.

Became a liability under Mourinho but no one has epitomised Man Utd’s resurgence quite like the Serbian.

Combative as ever. Booked. Has little in terms of quality, but gets bonus grades for his sheer hard work and determination. Kept tabs on Eriksen and got forward when he could. Epitomised the side’s gutsy efforts.

One of the many criticisms of Pogba is that he has not been seen in the majority of matches vs the other “big six” sides. Answered those critics superbly with a world-class assist – the defence-splitting ball that opened Spurs up completely for Rashford’s opener. Generally a dominant and impressive performance to continue his revival under Ole. Went close to scoring himself as well as that filthy assist. Ole deployed counter-attack tactics and Pogba was central to everything.

Linked the play well and played a part in United’s counter-attack game plan. Undoubtedly Ole’s first choice on the right but there remains the suspicion that he perhaps is better off the bench. Did his job.

In the form of his life. Another goal, that’s now eight for the season but, more than that, he’s playing with a confidence, a composure and an edge and finally flourishing as the top player we all know he can be. Like the team, he is unrecognisable from the struggles and shackles of the Jose Mourino era.

Quiet. Drifted in and out of the game, had the odd moment of quality and danger but looked short of his best. No surprise to see him taken off on 73 minutes.