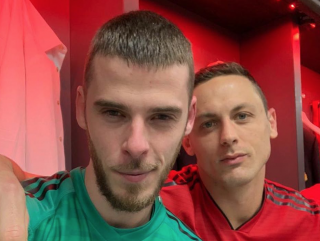 Manchester United are on a winning run of six games under caretaker manager Ole Gunnar Solskjaer.

The Norwegian is doing a better job than most expected and it’s only a matter of time before people start considering him as a candidate for the full-time manager role, especially if Gareth Southgate is one.

But it’s clear to see most players in the dressing are happier than what they were this season under José Mourinho, and today’s display is not something we would have seen under the Portuguese tactician.

It was like the Manchester United of old given how we went away from home for a big game and showed real attacking intent.

After the match, Nemanja Matic posed for a selfie to Instagram with man of the match David de Gea.

He captioned the photo: “Beware… We are taking over! Huge win tonight! @d_degeaofficial was on [fire emojis]”

De Gea’s pose in particular may get mocked at training on Monday morning, but his performance should let him away with it.

Beware… We are taking over! 👹💪 Huge win tonight! @d_degeaofficial was on 🔥🔥🔥