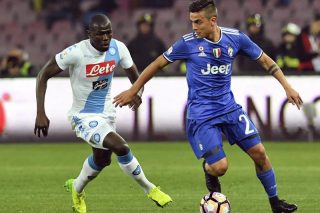 Manchester United now see Napoli defender Kalidou Koulibaly as their prime target for the summer as they think he wants to leave Italy, according to reports.

The centre-back has long been on United’s books but a deal has yet to be materialised.

Napoli chairman Aurelio De Laurentiis said back in December that the Italian club rejected a bid of £95 million from the Reds for Koulibaly, as per Goal, while the Manchester Evening News claim Real Madrid have emerged with significant interest.

MORE NEWS: Solskjaer stresses Tottenham match is about players – not who becomes next Man Utd boss

The Mirror claim United will make a separate move for Koulibaly in the coming summer transfer window after considering making an offer for the defender’s services this month.

The Senegalese footballer has been subject to racism from the terraces and the Mirror take a strong line in their report: “Manchester United will offer Napoli star Kalidou Koulibaly an escape route away from Italy’s racists.”

However, a story from Italian outlet Gazzetta dello Sport was recently picked up by The Metro, suggesting United will need to go crazy to land the France-born Senegal international with Napoli demanding an offer of around €120 million (£108m).

Napoli coach Carlo Ancelotti may try convince his 27-year-old centre-back to remain at the San Paolo Stadium, but hopefully the player feels that it’s time to move on.

Koulibaly joined Napoli in 2014 after two years at Belgian side Genk. Now, he’s on everybody’s radar, with The Mirror’s report stating he is set to become a priority for United next summer.

The Reds have had trouble at the back this season with Victor Lindelof the only centre-back at the club deserving some credit for his performances. Phil Jones has been Phil Jones, while Chris Smalling has been Chris Smalling.

There’s still hope for Eric Bailly to make it as a top United defender. He misses Sunday’s game through suspension but will be available for Brighton at home next week.