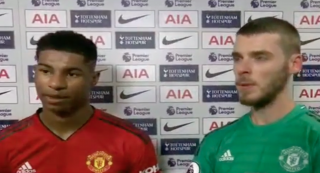 David De Gea was in unbeatable form as Manchester United claimed a huge three points against Tottenham at Wembley. The inspired Spaniard made a number of crucial saves with his feet, most notably his quick reaction stop to prevent Toby Alderweireld equalising for Spurs, as United held out for a 1-0 win.

The win means interim boss Ole Gunnar Solskjaer has now won his first six games in charge. More importantly, United managed to prevail in Solskjaer’s first true test as manager, facing a Spurs side who were attempting to close the gap to Liverpool in the title race.

Tottenham had a hatful of clear cut chances to take a point in the game, but the world class De Gea thwarted goal-bound attempts from Harry Kane and Dele Alli and Christian Eriksen.

The Spaniard was thrilled with United’s performance, in a victory which takes them level on points with fifth place Arsenal in the league.

“We won the game against a top team, we controlled the first half but in the second half they had chances. I was feeling very well with the first two saves, it was a great game,” De Gea told Sky Sports in his post-match interview.

“I don’t even remember some of the saves so I can’t pick a best. The manager brought some happiness, the players are playing well and the team is very strong now.

“This is the real Manchester United.”

De Gea believes United now have a real chance of making the top 4, a goal which seemed highly unlikely to be achieved just a few weeks ago when Jose Mourinho was sacked as manager.

Marcus Rashford proved to be the match winner for the Reds after a classy finish following a sublime Paul Pogba pass on the stroke of half time.

“That’s the most difficult game, the hardest we have had to work for a result  but we put the work in. It doesn’t matter, we got the points,” said Rashford.

Rashford was quick to praise teammate De Gea for his role at Wembley.

“The near post save form the corner was the best one! We played a different system against a team like this. This is what we have to do to beat the top teams.

“It’s a good responsibility to be the main striker but everyone has chipped in. It was the keeper today.”

United face Brighton next Saturday as they aim to close the game further in the race for Champions league places.