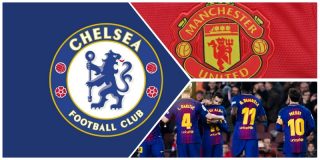 Chelsea have apparently been approached by La Liga champions Barcelona regarding the potential transfer of Philippe Coutinho, amid surprise rumours linking him with Manchester United.

The Brazil international joined Barça for £142 million just over 12 months ago, as per BBC Sport, but has had a dwindling influence after failing to start any of their past four league matches.

Meanwhile, The Mirror claims United have already opened talks with his agent.

Struggles to hit the heights of last season has seen Coutinho play second fiddle to Ousmane Dembele, with the Frenchman in much better form this season. This challenging period has also contributed to speculation over Coutinho’s uncertain future, although we still take United links with a pinch of salt.

Mundo Deportivo reports Coutinho is unhappy with his situation at Camp Nou – but that doesn’t mean he is looking to give up just yet. Footballers can go through rough patches and bounce back, it’s not as if that hasn’t happened before…

But the greatest spell of Coutinho’s career came in the Premier League with Liverpool. He has never reached that level for Barcelona which must be frustrating.

That may influence a decision to return to England, with Chelsea the latest to join the race, as reported by El Gol Digital.

The report suggests Barça president Joseph Bartomeu sees Coutinho as bait to sign Chelsea star Eden Hazard, who is also linked with a move to rivals Real Madrid, as per The Sun.

Perhaps a deal would make more sense for Chelsea if they’re going to lose Hazard, especially when new signing Christian Pulisic may take time to settle in the Premier League.