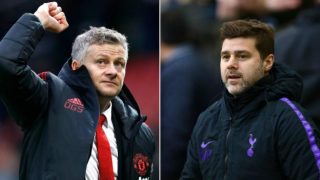 Ole Gunnar Solskjaer won’t be thinking about who the next full-time manager at Manchester United will be on Sunday when his players take on Tottenham at Wembley.

The pre-match build up has almost turned the encounter into a managerial showdown, with the winner taking his first step towards getting the bigger job in football.

But Solskjaer has made it clear he doesn’t want to look at it that way, even though Mauricio Pochettino is being tipped as the club’s first choice.

“We don’t kick a ball at all. They kick a ball. Of course, we might make a decision here or there, but it’s down to the players to perform and I’m sure my boys are ready.”

If recent form is anything to go by, the players could not have asked for a better time to face Spurs all season, and not because of anything to do with that lot…

The Norwegian made it clear when he came in as interim manager that United would focus on themselves rather than the opponent. The lads are on a winning run of 5 games since Solskjaer changed their approach.

He has done everything asked of him. Now, completely dismissing Solskjaer as a managerial candidate would be foolish.

Meanwhile, The Telegraph claim fears over Pochettino remaining at Spurs beyond the summer will see the United hierarchy consider England manager Gareth Southgate as a candidate.

This news emerged after The Sun reported on Daniel Levy’s response to links concerning Pochettino and United, claiming the club chairman wouldn’t accept £50 million for the Argentine coach.