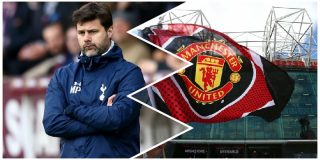 No direct quotes but this is the first real indication that Mauricio Pochettino is listening to what is being read about his future as speculation builds around the Manchester United job.

The line surfacing this morning suggests the Argentine will not jump at the prospect of joining United if offered the job.

The Times claims that the Tottenham manager is United’s first-choice to replace Ole Gunnar Solskjaer in the summer, a month after the club sacked José Mourinho. (If you haven’t got a subscription to The Times, you can read the report via The Metro)

However, Pochettino is said to be “angered” and “irritated” from rumours linking him to the job at United considering it would mean turning his back from his project at Spurs.

But surely, he sees this as a once in a lifetime opportunity? After all the incredible work he’s done with the London club, it’s time to move onto something bigger and better.

The report adds that Pochettino’s must evaluate a number of things before making a decision, needing to consult his coaching staff and family, who we assume are living in London.

Spurs may not be winning titles but they’re doing well to compete in title races and have become Champions League regulars under Pochettino’s management.

While the project under Pochettino is starting to show more positive signs as he continues to get the best out his squad without significant funding, he knows the transfer kitty at United would allow him to buy exactly the players he wants… Granted we don’t have another José Mourinho / Ed Woodward stand off episode.