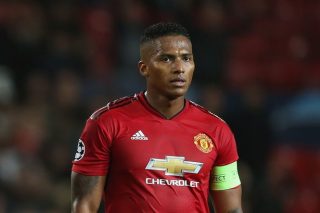 According to an exclusive in The Mirror, Antonio Valencia will end his Manchester United career at the end of the season with his advisers negotiating with Inter Milan.

The Serie A giants have allegedly been made aware that the Old Trafford club have no plans to extend the 33-year-old’s deal, with the Ecuadorian’s performance levels dipping drastically the past 12 months.

Valencia remains club captain with United where he has spent 10-years. The club have until March to offer the winger turned right-back fresh terms, so it’s probably a good time for the former Wigan star to assess his options in the market.

The report states that Inter would prefer to land Valencia this month, however, United are wary of weakening Ole Gunnar Solskjaer’s side. Though, anyone who has watched Valencia play this season wouldn’t think he would be much of a loss…

Portuguese youngster Diogo Dalot arrived during the summer and has been given some minutes in the first-team, while Ashley Young looks likely to take up the role most weeks due to the experience he brings to the team.

Dalot may have plenty of promise but he still looks very raw. It wouldn’t be the worst idea to sign a right-back in the summer – more experienced than the former FC Porto full-back but younger than Young.

While nobody springs to mind, the scouts should get work as soon as possible.