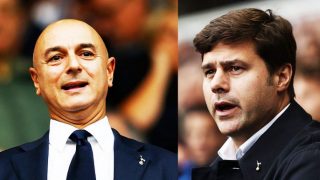 The Sun reports Tottenham chairman Levy will do his utmost to hinder United’s attempts to appoint Mauricio Pochettino as their next manager by making it clear to members of his board that he will reject any offer at the end of the season.

It states that Levy will not consider parting ways with the Argentine coach for £50 million.

While it’s understandable that Spurs will fight to keep hold of their manager, the United job may be too big for Pochettino to turn down, even if it means walking away from the project he started with the London club which is seeing great results on the pitch.

To give this a different perspective, though, we must point to the fact Pochettino is still under contract at Tottenham and everyone must respect that. It’s still possible that we’ll end up with him as our manager next season, but Levy and Spurs have every right to do what they can to prevent that from happening.

They want what is best for Spurs, not United.

However, Pochettino’s men are third in the Premier League and within touching distance of Manchester City and Liverpool above them. They’ve also got one foot in the League Cup final after beating Chelsea 1-0 in the semi-final first-leg.

A separate report from The Telegraph published last month stated that Pochettino was United’s first choice to take the job from caretaker boss Ole Gunnar Solskjaer, though the Norwegian has put up a fight to keep the job since then.

The suits at United will be monitoring Sunday’s game closely as both managers go head-to-head. A win for the Reds will keep top four hopes alive, while Spurs are looking to remain part of the title race.