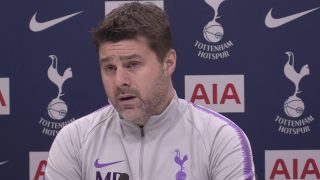 Manchester United travel to Wembley where high-flying Tottenham Hotspur hope a win keeps them in the title race.

Solskjaer’s team, on the other hand, know the most likely candidate for the Manchester United job is in the opposite dugout.

So, it’s an audition on many levels – for players and both managers.

But the Norwegian goes into the game with a strong record having won all five games in charge since replacing José Mourinho almost a month ago.

Spurs will be the toughest test yet as it’s with good reason they’re positioned third in the Premier League and within touching distance of Manchester City and Liverpool.

However, Mauricio Pochettino has been dealt a tough hand confirming this afternoon, as per the official Tottenham Hotspur website, that at least three members of their squad have been ruled out of action for Sunday’s match.

The game comes too soon for England international Eric Dier, who has only recently returned to training. Victor Wanyama is still recovering from his knee injury.

Spurs will assess Lucas Moura’s fitness ahead of the game and are refusing to rule him out completely. The Brazilian missed their League Cup semi-final first-leg win over Chelsea after suffering a “knee problem”.

That tells us Spurs are likely to line-up with Moussa Sissoko as a holding midfielder, along with Harry Winks in the middle.