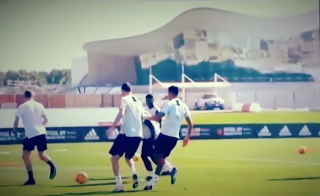 Footage has emerged of Manchester United interim boss Ole Gunnar Solskjaer pulling off an outrageous piece of skill in training.

The players have enjoyed a training camp in Dubai this week and Solskjaer doesn’t seem afraid to get involved with the drills, showing that he still has skills to pay the bills from his playing days.

With Tottenham away on Sunday, it’s important our preparations go to plan after Mauricio Pochettino’s men beat Chelsea 1-0 in the League Cup semi-final first leg during the week.

This will be Solskjaer’s first real test as Manchester United manager after what has been a perfect start. The Norwegian, who replaced José Mourinho last month, has led the Reds to five wins from five matches in charge.

It all started with a 5-1 thrashing over Cardiff City, before beating Huddersfield Town and Bournemouth with ease. Then back-to-back 2-0 wins over Newcastle and Reading followed, with the latter in the FA Cup against Championship fodder.

On Sunday, Solskjaer has a chance to break a colossal 73 year record against Pochettino’s Spurs. No United manager has ever won their opening six matches in charge. The closest is Sir Matt Busby, back in 1946, when he won his first five games in the job.

Check out the footage below of Solskjaer showing great footwork in training. I wonder if he fancies becoming player manager between now and the end of the season (not that United are in need of more goals!).