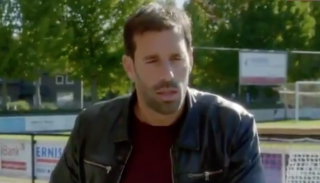 Ruud van Nistelrooy gave a brilliant interview this week about how he eventually mended his relationship with former manager Sir Alex Ferguson.

The former Manchester United star opens up his old feud with Ferguson while admitting he still regrets the circumstances which led him to leave Old Trafford 13-years ago.

He left to join Real Madrid in 2006 after falling out with Fergie, but luckily for fans Cristiano Ronaldo was ready to become the club’s main goalscorer. And, that’s what Van Nistelrooy was before he left, but he couldn’t understand why he was an unused substitute for United’s League Cup final win over Wigan in 2006.

After later finding out he would not be involved against Charlton for the final game of the season, Van Nistelrooy decided to storm out of Old Trafford just three hours before kick-off. That would be the mistake which led to him leaving the club under a grey cloud in unfortunate circumstances.

Speaking to Eleven Sports this week, Van Nistelrooy admits he is not proud of the manner in which his United career ended, without getting to say a proper goodbye to the supporters.

“It was very harsh, both ways,” he told Eleven Sports.

“Especially after five years of having such a strong bond. I learned so much from him, and in all modesty: he from me too.

“And yet the end was ruthless.”

Then Van Nistelrooy revealed it was he who made the first contact with Ferguson after his departure, which is not only revealing, but character showing as you won’t see it happen anytime soon with former United captain Roy Keane.

“It was me who took the first step to make it okay again. I called him. A few times a year I felt bad about what I had done to him and the names I called him when he kept me on the bench the entire match in the League Cup final I Cardiff. In a blind rage I shouted at him.

“I called him something. I called him a number of things in a blind rage. Cocky and stubborn as I was, I couldn’t snap out of that for some time after. That’s how it all crashed.

“It was just really disrespectful, there were lots of other people there. It wasn’t all that outrageous in terms of words but it was completely out of order. Not done.

It’s clear from the above that Van Nistelrooy regrets what he said and done.

My favourite player growing up, I recall just how gutted I was the day he left the club.

But Fergie had to make way for an incredible young Portuguese talent as Van Nistelrooy appeared to be getting big for his boots.

When asked if he called Fergie a Scottish pig, Van Nistelrooy never directly answered the interviewee.

You can watch a clip of the interview below.