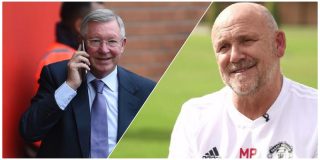 Manchester United assistant manager Mike Phelan has opened up about how Sir Alex Ferguson’s speech to the players during the festive period was “important”.

It must have been a surprise to players when Ferguson arrived at Carrington to meet them all following José Mourinho’s dismissal, but these are all attempts to restore the United of old, however difficult that will be.

It is believed that Fergie played a role in Solskjaer’s appointment until the end of the season and if he keeps winning games at this rate, Ed Woodward will have a tough job trying to take it from him.

United have five wins from five games under Ole, a tremendous record considering how inconsistent we became under Mourinho this season. As a fan it was a challenge to build confidence for any game, so you can only imagine what it was like for the players.

According to The Sun, Fergie gave a rousing speech to the dressing room, reminding them what it takes to be a United player and that the good times will come again. It sounded like an attempt to boost confidence, which has worked so far.

Phelan spoke to MUTV while out in Dubai with the squad:

Phelan: “Sir Alex came in and I think that was important. Ole isn’t afraid to take on board things from him. I think it was refreshing for Sir Alex too, he had a smile on his face and wanted to get that energy and football brain ticking over again. It was really good.” #mufc [MU]

United have certainly kicked on since Mourinho got the axe – not just winning games, but doing so convincingly and putting the sword to opponents.