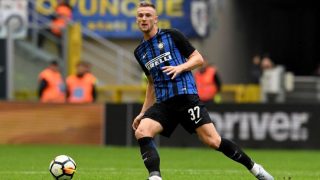 Name a Serie A defender Manchester United have not been linked with since the summer? We’ll wait…

Seriously, every day there’s a new name to report on, and the list of potential targets is growing at an alarming rate.

It was over the summer when executive vice-chairman Ed Woodward disappointed José Mourinho by not signing a new centre-half after the former United manager had drawn up a list of targets.

However, despite a change in manager, United still need that commanding defensive signing and Tuttomercatoweb in Italy are claiming that the Reds have turned their attention towards Inter Milan centre-back Milan Skriniar, with a £54 million bid made for the 23-year-old.

Considering none of the nationals have ran the story yet, it may be worth taking United’s alleged ‘bid’ with a pinch of salt, though it shouldn’t come as a surprise that the club would be interested in signing a defender like Skriniar.

The Slovakian has become one of the best defenders Serie A has to offer, with Napoli’s Kalidou Koulibaly also deserving of such praise, while being another defender from the Italian top flight linked with a move to Old Trafford, as reported by ESPN.

Skriniar is an aggressive sort, comfortable on the ball and capable of handling tricky opponents like Barcelona and their formidable attack, as seen this in the Champions League group stages.

A partner for one of our centre-backs – probably Victor Lindelof if performances this season are to be ultimately judged — is desperately needed.

Meanwhile, it would be premature to completely rule out Eric Bailly as being a regular for United. He was terrific in his debut season which saw United win the Europa League and League Cup, and the next manager should aim to get the Ivory Coast international back playing at that level with consistency.

Bailly is suspended for this weekend’s away clash at Wembley against Tottenham. Ole Gunnar Solskjaer is likely to partner Lindelof with Phil Jones…