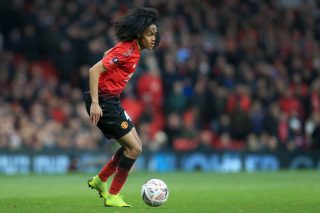 Usually, it takes time to earn an individual chant from the terraces.

Not for Manchester United youngster Tahith Chong, who only had to wait a few minutes to hear his name sung at Old Trafford after coming on against Reading for his first-team debut on Saturday, in the FA Cup third round.

“One Chong, we’ve only got one Chong,” rang around the Theatre of Dreams.

United fans will be aware of Chong’s potential after impressing in the youth teams and, of course, being on tour with the first-team last summer.

Since then Chong had been dreaming of making his big entrance.

It hasn’t been a walk in the park for the Dutch youngster, though. A serious knee injury left him side-lined for 10 months back in 2016.

Manchester United’s former head of youth recruitment, Derek Langley, has revealed that the Reds weren’t the only Premier League club in for Chong when he was at Feyenoord.

“Tahith was spotted when he was a 14/15-year-old playing in a tournament at Carrington. What used to be the Nike Premier Cup,” he told the Manchester Evening News.

“Tahith’s parents would be the first to tell you that his form dipped slightly due to growth issues so at that time I just held fire. I carried on watching him and realised his form was coming back.

“He was on the verge of signing for Chelsea and managed to convince his parents and the boy his future lied at United.”

Without question it does…

Chong has everyone excited at United now with fans hoping he is given more game time between now and the end of the season.

He will be looking back at his decision to join United with relief considering how Chelsea have threated their brightest prospects in recent years.

Only now they’ve started playing Callum Hudson-Odoi but it may be too late with Bayern Munich circulating around the 18-year-old, as reported by talkSPORT.

At least youngsters are being handed opportunities at United again. That’s the model we’d really like to see restored at the club.