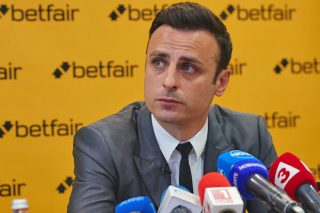 Dimitar Berbatov is in favour of Ole Gunnar Solskjaer getting the Manchester United job on a full-time basis.

Last month Solskjaer was given the job as caretaker manager until the end of the season and has since won his first five games in charge.

A report in the Manchester Evening News this week suggested that even the players like the idea of Solskjaer remaining in charge next season and beyond, which suggests the Norwegian is going up the popularity ladder.

MORE NEWS: How Tahith Chong snubbed Chelsea for Man Utd back in 2016

In the lead up to United’s league fixture at Wembley against Tottenham, Dimiar Berbatov, who played for both clubs, revealed he is adamant about Solskjaer being the right man for the job.

“If United keep going like this – and there’s no reason why they will stop performing – the job will surely be his,” Berbatov told The Mirror as an ambassador for Betfair.

“He’s doing a great job. By the end of the season, as long as they keep playing like this, they should give him the job whether or not they finish in the top four.

“If they don’t, I’m sure that another Premier League team will give him the job. He’s making his name once again in the top-flight and it’s great for him.

“When a club legend becomes your manager, he automatically gets the attention of the players, purely because he had been there and done that.

“When you are in the position of Ole, having scored so many goals and won so many trophies, he gets the attention.

“He doesn’t need to yell or scream to prove anything, he just gets it.

“From that point on, he needs to show them that they need to trust him, that he knows what he’s doing and, judging by the results and the way they play, it’s obviously working.”

Many will reserve their judgement on Solskjaer until this weekend as he faces his first big test as United boss against Spurs, who won 3-0 at Old Trafford earlier this season.

It was be a fantastic achievement for the former Cardiff City and Molde manager to land the biggest job in football. And, it’s no longer deemed completely impossible.

Berbatov adds that this weekend’s game will show where United are at under Solskjaer.

“Unless they don’t lose to the end of the season, of course. That really would be unbelievable.

“If Spurs can overcome the tiredness in their legs, they have a great chance of winning again.

“But United will be so confident after five wins in a row and they can win this if they play smart and exploit any fatigue Spurs might show.

“It’s going to be entertaining, I’m sure. A defeat for either would be a damaging blow to their season-long goals.”

There is certainly a feel good factor about United again, although that could end as quickly as it reoccurred following the sacking of José Mourinho on December 18.

The Reds needed a lift from the dressing room to the terraces after it seemed like Mourinho was sucking the joy out of football for everyone involved.

But even if Solskjaer walks away from the job this summer and it’s handed to someone else, he will remain an icon and potential candidate for the future.