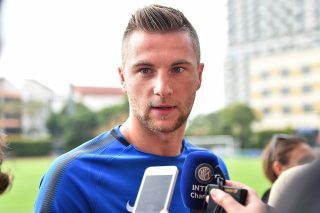 Inter Milan defender Milan Skriniar has reacted angrily to speculation linking him with a bunch of clubs, including Manchester United.

The Slovakia international became a target for United under José Mourinho after impressing in Serie A at a young age. Now 23, Skriniar is attracting interest from some of Europe’s biggest clubs.

And the Reds could do with a new signing in defence after the first half of the season showed up many defenders at the club. It’s time to call it a day on Chris Smalling and Phil Jones, while the jury is out on Eric Bailly. Sweden international Victor Lindelof, however, has been one of United’s most improved players this season and deserves a chance.

Tuttomercatoweb will be one of the outlets Skriniar is hitting out at after claiming a bid worth £54 million had been offered by United to sign the Slovakian.

With the help of Instagram, Skriniar has spoken out about his future with an angry post, which now seems to have been removed, suggesting he was given a minor slap on the wrist for use of bad language. Heh!

But that’s where the Manchester Evening News saves the day by quoting the Inter Milan defender.

“You write things that you don’t even know,” Skriniar posted to Instagram, according to the MEN

Skriniar clearly wants to focus on his career and what is current.

This isn’t an attempt to commit his future to the Serie A giants, although he has never pushed for a move away from the San Siro.

He’s clearly just sick and tired of reading speculation about his future.

La Liga champions Barcelona have also been linked with a move for Skriniar, as reported by ESPN.