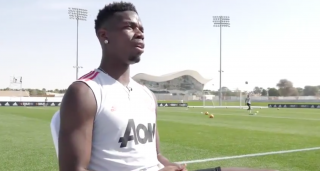 Paul Pogba had to act on instinct as he interrupted an interview with MUTV to control a pass he knew very little about.

The French World Cup-winning midfielder showed just what a classy footballer he really is in bringing down a ball that would otherwise have been a very near miss. Even Pogba’s interviewer was clearly impressed by Pogba’s deft weak foot touch.

Pogba was speaking during United’s warm weather training camp in Dubai as United prepare for Sunday’s game against Tottenham at midfielder. He is set to return from a knock suffered in the Newcastle match last week which ruled him out of Saturday’s FA Cup win against Reading.

Pogba’s fitness will provide a huge boost for United, with the player in a fine run of form under new manager Ole Gunnar Solskjaer.

He’s certainly a player Spurs don’t want to be facing this weekend.

Just another day at the office for @PaulPogba 😎 #MUFC pic.twitter.com/ZxkZIVAJff