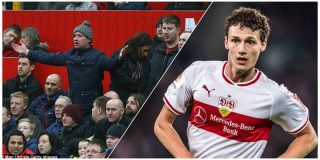 France World Cup-winner Benjamin Pavard will join Bayern Munich on a five-year deal from next season, according to the Bavarian club’s sporting director, Hasan Salihamidzic.

The 22-year-old impressed at the World Cup last summer, scoring the best goal of the tournament against Argentina in the last 16, and has now earned a move to the German champions.

After watching him perform at the World Cup which he’d later go on to win, we suggested that Pavard was the right-back United should be targeting. Sadly we’ve lost out without any suggestions the club were ever interested in bringing the Frenchman to Old Trafford.

According to The Guardian, the VfB Stuttgart defender will join the Bundesliga’s biggest club for €35 million.

“I can announce that we managed to get the services of Benjamin Pavard from 1 July 2019,” Salihamidzic said, as per BBC Sport.

Pavard would have been a good signing for United considering Diogo Dalot is still raw, Ashley Young is not a right-back and Antonio Valencia’s best days are behind him. The French defender is also versatile enough to do a job at centre-back when called upon.

Check out the reaction to United not signing Pavard below. We’re not alone in thinking he would have been a good signing…

Bayern signing Pavard. They always quietly make some decent signings despite having a strong squad. United should take a leaf out of their book smh.

So United are gunna watch Godin go to Inter for free, Dembele go to China for £9m and Pavard’s release clause get triggered.

So despite having Kimmich, Bayern still went for Pavard?

And we’re here not looking at anyone else cos we’ve got Young, Valencia and Dalot? OK. #mufc

A serious club acquiring yet another quality RB/CB in Benjamin Pavard, but the supposedly richest club stuck with a masquerade dancing feet RB… 😔 #Mufc

Pavard reported to have been sold due to a €35m release fee in his contact, what a bargain!

Woodward what are you actually doing, get a DOF in and stop dragging your heels.#MUFC#ManchesterUnited

Bayern signed Pavard for €35m while any wonderkid with less than half the achievements that #MUFC sign will cost €45m at the minimum. Cheers, son’s crying

Pavard is a going to be a great signing for Bayern. Would’ve loved him at United.