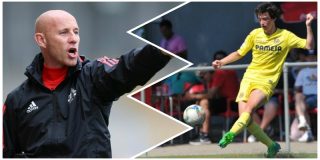 Manchester United are working on a deal to sign Spanish defender Adrian Corral, according to reports in Spain.

It has been suggested that United are closely monitoring the teenage who is coming through the academy at Villarreal as a left-back, though he is said to be versatile enough to play at centre-half when called upon.

A report from Spanish outlet Super Desporte claims Corral has already announced that he will leave Villarreal when he turns 16, with rumours that United will gain a talented player as a result.

The last player to join the Reds from the Yellow Submarines was also a defender. However after a brilliant debut campaign, Eric Bailly has struggled to replicate such form and is currently suspended after picking up a red card against Huddersfield Town in the league. This weekend’s fixture against Tottenham will be the final game of the Ivory Coast international’s suspension.

Sport describe the youngster as a ‘pearl’ and claim that Corral has also received an offer from Liverpool.

Aged 16, caretaker manager Ole Gunnar Solskjaer isn’t likely to have much impact on whether Corral joins United, but the youngster should be informed about the changes at Old Trafford and how more youngsters are getting opportunities since José Mourinho’s dismissal.

Nicky Butt, head of coaching at the Manchester United academy, may have a greater say in any move.

Tahith Chong and Angel Gomes have both featured for the first-team since Solskjaer arrived as interim boss on December 19, with chances expected to be given to the other youth players such as Mason Greenwood and James Garner.

Time will tell if we can agree on a deal with this youngster and Villarreal.