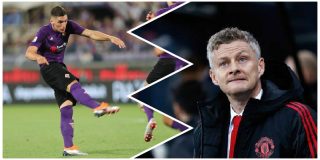 Manchester United are reportedly ready to push on and complete the transfer of Fiorentina defender Nikola Milenkovic by making a formal bid for the player.

The 21-year-old looks to be a talent after impressing in Serie A at such a young age, and it hardly comes as a surprise that United are rumoured to be interested in getting his signature.

A report from Tuttosport, translated by Football Italia, suggests United are preparing a formal offer for the €50 million-rated centre-back.

MORE NEWS: Man Utd close in on Spanish teenager despite offer from Liverpool

Such a signing should see the end of Phil Jones and Chris Smalling making the team most weeks. A large section of the fanbase has had enough of the English pair playing at the back for United, acting as constant liabilities whenever given starts.

This season, only Victor Lindelof deserves praise from our list of centre-backs. Marcos Rojo has hardly featured and Eric Bailly plays like Jones after a bag of speed.

The only issue with Milenkovic – without watching him play for Fiorentina each week – is United already have potentially good defenders at the club. At the age of 21, it could still go either way, as we’ve seen with the likes of Jones and Smalling, who both looked certain to become top defenders in the past.

Someone with winning experience that is already at the top of their game would be the ideal fit, so if anyone can identify a younger Diego Godin that would be appreciated.

Still, we think Milenkovic would be an upgrade on some of the defenders currently at United, but it looks like Lindelof has an advantage over the rest when it comes to partnering this new signing Ed Woodward is due to make this month or in the summer.

This update follows a claim made by The Sun that United interim boss Ole Gunnar Solskjaer was scheduled to discuss this potential signing with club suits this week.