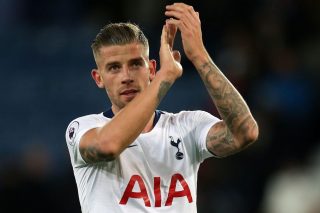 Toby Alderweireld says his performances this season prove he is happy at Tottenham Hotspur and committed to the club, despite ongoing speculation over his future.

The Belgium defender was at the centre of a transfer storm last summer, with Manchester United showing interest without lodging a formal bid for Alderweireld’s services, and a recent report from the Daily Star claims United chiefs vetoed the move over fears he would not be able to play in a back two.

He played a key role on Tuesday night as Spurs beat Chelsea 1-0 in the League Cup semi-final first leg.

Spurs last week activated a one-year extension in the defender’s contract to keep him until summer 2020, but it triggered a clause which allows him to leave the club for £25 million at the end of the season, as per The Standard.

When quizzed on the release clause, the former Southampton defender said: “People can see that every time I play that I give 100 per cent for this club – this is what I keep doing every time I play.

“I’m only focused on things on the pitch. This is my fourth season and I’m very happy. I’m doing everything to help the team.”

Alderweireld avoids the question and, like any model professional, is making sure he keeps performing at a high level – presumably to attract more interest and ensure a big summer move at a bargain price.

Meanwhile, a fresh report from the Manchester Evening News suggests Paris Saint-Germain have intensified their interest in Alderweireld. He is going to be hot property this summer when you consider value and how much top defenders are going for nowadays.

Though United shouldn’t try to get a cheap way out of their defensive crisis. This calls for a top signing, no matter how much it costs, and make no mistake about Kalidou Koulibaly being a better fit than Alderweireld, as far as the Reds should be concerned.

While it makes sense to consider Alderweireld, United need to recruit better than they have done in the past. Otherwise the next manager is destined to fail.

United take on Spurs this weekend at Wembley.