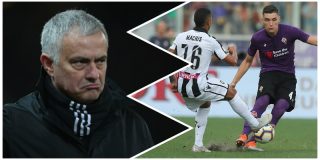 Manchester United are set to cool interest in Fiorentina defender Nikola Milenkovic after the departure of Jose Mourinho, according to ESPN.

The report suggests Milenkovic was targeted by Mourinho to be signed this January, as he desperately looked to bolster his defensive options. A report from Tuttosport, translated by Football Italia, suggested United were preparing a formal offer for the €50 million-rated centre-back.

However, United are now set to look elsewhere, and are prioritising Napoli defender Kalidou Koulibaly and highly rated Inter centre-back Milan Skriniar, as reported by The Independent.

Although Milenkovic, 21, is seen as a very promising talent, United already have promising defenders at the club in Eric Bailly and the vastly-improving Victor Lindelöf. Axel Tuanzebe is also set to return to the club at the end of the season from his loan at Aston Villa where he has impressed so far.

Koulibaly and Skriniar are players already at the peak of their powers which make them attractive options for United. But there is a recognition at the club that any deal in January may be difficult to take place as targets are not likely to be sold at a reasonable price.

There is no doubt United are in need of a new defender, despite an encouraging start to Ole Gunnar Solskjaer’s interim reign. United still remain defensively frail and may be exposed when coming up against tougher opposition, including Sunday’s trip to Wembley to face Tottenham.

Solskjaer has expressed his happiness with his current squad at Old Trafford, but will provide his input to Ed Woodward about any potential recruitments.