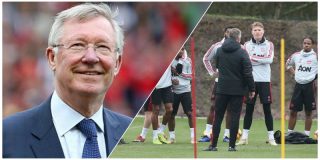 According to The Sun, Ferguson gave a rousing speech to the United platers, telling them: “You can make this club great again.”

The club icon was invited to the training ground by Solksjaer over the Christmas period to speak to the players, with the Norwegian coach working towards unifying the dressing room after an unhappy spell under José Mourinho.

A source close to the club revealed to The Sun: “He told the lads that this group will make United dominant and successful again.

“He said that he believes in them and he wants them to enjoy themselves and to fight hard for each other and leave everything on the pitch.

“He also told them that the club is in good hands and he promised them that it will become bigger and better in the years to come and they will be part of this success.

“The players believe that there are some good times ahead.”

A great call by Solskjaer to get Fergie back to the training ground. Someone needs to restore the winning mentality at United and few would do a better job at that than the legendary Scot.

It would have helped players to side with Solskjaer too, quenching any fears they would underestimate his work previously as a manager.

Sun reporter Neil Custis adds another quote from the club source to his report: “The players want to repay Sir Alex for his support and kind words and are determined to win something for him and Ole Gunnar Solskjaer this season.”

United beat Reading 2-0 in the FA Cup to reach the fourth round and were drawn against domestic rivals Arsenal. That win saw Solskjaer match Sir Matt Busby record of winning his first five games as United match, but the real challenge is next when the Reds travel to Wembley to face Tottenham in the league.

The squad is currently in Dubai for a warm-weather training break, and Solskjaer will be hoping they all return refreshed and ready to break into the Premier League’s top four.