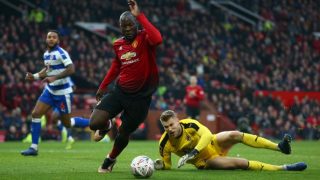 The signing of Romelu Lukaku from Everton was hotly contested. In the summer of 2017, Manchester United were shopping for striker following the horrible injury to the mercurial Zlatan Ibrahimovic, and two names were in the frame; Alvaro Morata, and Lukaku.

The favour seemed to fall the way of the Spaniard, a smaller and less physical option to Lukaku, coupled with the fact it seemed the Belgian was destined to return to former club Chelsea. As fate would have it, the reality was the complete reverse.

Though United’s new striker had notched up a very impressive goal haul in the Premier League, doubts still hung heavily above his head. £75m plus Wayne Rooney loaded those questions further, as per Eurosport, with Morata moving for around £20m cheaper fans were unsure. But a scoring start to life at Old Trafford, and a season that ended with 27 goals in all competitions was as good a two finger salute to your doubters as you could ask for.

Of course, the calibre of opponent was then called into question, a striker at Manchester United can’t simply be a goalscorer without there being something amiss with the fact, and his usual mid-season trough caused plenty of unrest at the time.

So far this season, and if you believe everything you read you’d drive yourself insane, and suddenly a striker with over 100 Premier League goals before he’s close to turning 25-years-old and his countries all time top goalscorer in the same period, is no good because he had his trough sooner than usual. He came back from a promising World Cup campaign looking rather voluptuous (in as much as you’d gladly believe he’d been dieting on children and dogs), and didn’t seem the energetic menace he was in 2017/18. Plenty have blamed his ability, the heroic weight gain or fatigue from a strenuous 12 months for the dip in form, but new evidence has come to light under the interim boss – 3 goals in 3 games in an attack-minded team is a clear and obvious pointer to the issue.

To start the dissection on a positive note, huge credit should be given to the young striker for managing 27 last term, and the 6 he had before the departure of José Mourinho. Why you ask? For the first 15 months of his Manchester United career, Romelu Lukaku was persistently asked to highlight his weaknesses in the system the former manager played. Rarely did we see him allowed to be as comfortable as he was at Everton and West Brom previously, constantly we saw the ball fired at his head, his chest and testing his utterly woeful first touch. Time and again a player with blistering pace and ox-like strength was given nothing to run on to, no chances to batter his way through defences and make chances. He may not score every opportunity he gets, but allow him enough and he’ll score for fun.

Of course a player of his stature should be utilised. Crosses provided, his first touch should be much better than what it is as a professional, and his hold up play maybe should be better considering his strength, but these should be qualities called upon only when needed and not as the default setting. If you want meat on the bone of this, his goal against Reading is all I need to provide. Then his other two strikes under Solskjaer come in to back the point up further, poachers efforts where he was allowed to attack the space and find himself exactly where he needs to be and a clinical touch we all know he possesses.

He isn’t pretty to watch, but only a fool would attempt to deny the fact he is a natural born goalscorer, he just needs to be allowed to play his natural game. Ole Gunner Solskjaer seems to understand this and but for the form of Marcus Rashford whilst the Belgian was on leave, it would certainly be 3 in 3 starts, if not more for the grace of more time. The weight looks to have dropped, the goals have started flowing and the football is beginning to suit a man not yet in his prime. Romelu Lukaku hasn’t shown us his best yet, but he might not be too far off doing so.