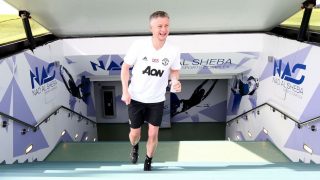 Ole Gunnar Solskjaer has had his say on United’s fourth round FA Cup draw after being handed a tough away tie to old foes Arsenal.

The Manchester United boss is relishing what will no doubt be a tougher test for his players after a successful start at the club winning 5 consecutive games, albeit against weaker opposition.

“Fantastic. We need these games. These players need the big games to be challenged,” said Solskjaer in an interview with MUTV, as per ManUtd.com, during United’s warm weather training camp in Dubai.

MORE NEWS: Why Fred is missing from Dubai trip with Man Utd teammates

”Of course, everyone says we’ve won the last five games but [they have] not been [against] big opposition. But you can only beat the teams you play and, for us to get tested and go to the next level, you need those games. And if you want to win the FA Cup, you have to beat everybody.“

Solskjaer will be hoping a win at the Emirates against Unai Emery’s side can help United equal Arsenal’s record of 13 FA Cup trophies.

Ole has fond memories of the FA Cup having won it twice as a player in 1998-99 and 2003-04, and hasn’t forgotten the most famous FA Cup tie between the two clubs, the semi final in United’s treble winning season of 1999.

“Maybe one of the best FA Cup memories was against Arsenal at Villa Park when Peter [Schmeichel] saved that penalty towards the end and Giggsy’s dribble [for the winner].

“If they’d have beaten us, if Peter hadn’t saved the penalty, I think they probably would have gone on to win the Double and pipped us to the league. So I think that save of Peter’s was the catalyst for the Treble.”

It is encouraging to see a United manager be so thrilled with what was perhaps a daunting fourth round draw. You can’t help thinking José Mourinho would not quite have been as optimistic in what is already a tough run of games for United in the January/February period.

The tie will take place between 25 and 28 January.

United are currently enjoying a warm weather training camp in Dubai preparing for Sunday’s crucial game against Tottenham at Wembley.