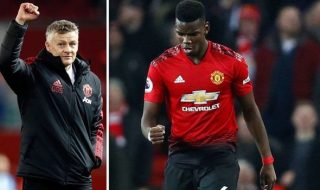 Ole Gunnar Solskjaer is confident that Paul Pogba will recover from a knock picked up in Manchester United’s victory over Newcastle last week in time for Sunday’s crucial clash against Tottenham at Wembley.

Pogba was on the receiving end of a wreckless challenge from Jonjo Shelvey, forcing him to be ruled out of United’s 2-0 FA Cup victory over Reading at Old Trafford. The Frenchman had flown out separately to his United teammates to their warm weather training camp in Dubai after staying behind for extra treatment in Manchester.

“Paul has had his knock and has had a few days of treatment back home. Hopefully, we can get Paul on his feet during this week.” said Solskjaer as per Sky Sports.

United will be hoping Pogba makes a full recovery having made a fantastic start to life under Solskjaer. Pogba has thrived in a new attacking role under the Norweigan, who has won his first 5 games in charge of the club. The midfielder will have to play a key role if United are to make it 6 from 6 at Wembley on Sunday, against an in form Tottenham side. A win for United would place them firmly back in the hunt for a top 4 finish.

Elsewhere, United remain short in defence after suffering a further setback this week. Marcus Rojo has had to cut short his training camp in Dubai through a further delay on his injury. Chris Smalling is also still ruled out as he is recovers from a sore foot.

It still remains unclear if United will bring in defensive reinforcements in January, with Phil Jones and Victor Lindelöf the only centre-backs available on Sunday as Eric Bailly serves the last of his suspension for a red card against Bournemouth.

Kalidou Koulibaly and Kostas Manolas have both been linked with a move to Old Trafford in this window, although no official bid has been made for either player.