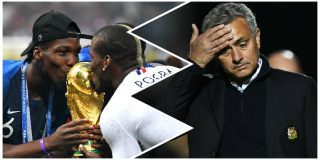 Mathias Pogba has lifted the lid on the relationship between José Mourinho and his brother.

Paul Pogba did not have the greatest relations with former Manchester United boss Mourinho, but has kicked on of late under caretaker manager Ole Gunnar Solskjaer, looking an entirely different player and closer to the one who won the World Cup last summer.

It has been claimed by his brother, Mathias, that Mourinho’s ego dominated the dressing room leading to clashes with players.

“It was Mourinho who was the problem,” Mathias Pogba told RMC Sport, as quoted by the Standard.

“Mourinho still wants to be the centre of attention. The problem was Mourinho, right down the line.

“From what we see of Mourinho, he always wants to be the maestro, the centre of attention.

“(Paul) does not even calculate that aspect: you respect him, he will respect you, you trust him, he will produce big performances.”

That’s what you call brotherly love.

Though, we don’t know what exactly went on behind closed doors. It is possible that there was a pair in it – Pogba and Mourinho – but it’s the manager who paid the heaviest price.

But United have not lost a game since Mourinho was axed. Solskjaer has come in and won 5 games from 5, although with Tottenham away at the weekend that record may soon change.

Pogba has been in exception form but is currently nursing an injury he picked up against Newcastle last Wednesday night. A horror challenge by Jonjo Shelvey left the Frenchman hobbling out of St. James’ Park after completing the full 90 minutes.

It remains to be seen whether Pogba will return in time for Sunday’s clash against Spurs.