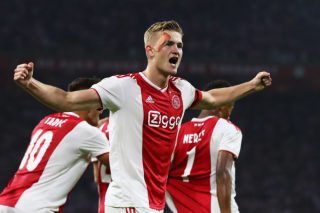 De Ligt is building an incredible reputation as one of the most talented young footballers in Europe. He made his debut in 2016, the same year Ajax reached the Europa League final and lost to José Mourinho’s United.

The Dutch youngster won the 2018 Golden Boy award and is nearing 100 senior appearances for Ajax despite being only 19. It’s frightening to think what a player he will become with the vast experience already earned at such a young age.

United, on the other hand, have constantly rotated their centre-backs this season with Mourinho and now Ole Gunnar Solskjaer unsure of the best defensive combination. Only Victor Lindelof has come out of it deserving praise.

As a result, the Reds have conceded 32 goals in the Premier League so far this season…

But signing De Ligt would bring one of the hottest prospects in European football to Old Trafford. His form of late has earned him 13 caps for the Netherlands already, and it’s no surprise that a host of clubs are chasing his signature.

Juventus are deemed one of the front runners for De Ligt, but Van Loen, winner of the 1992 UEFA Cup with Ajax, believes the youngster would be far more suited to the ‘stronger’ Premier League with Manchester United being the ‘perfect’ destination.

“I think Manchester United is perfect for De Ligt,” he told Goal.

“I hope De Ligt rejects Juventus’ offer – Italian football does not suit him and the Premier League is much better and stronger.”

Ajax remain unbeaten in this year’s Champions League and will face Real Madrid in the round of 16. That is an incredible achievement for the Dutch club considering their group consisted of Bayern Munich, Benfica and AEK Athens.

They will be a match for any side in the competition and are definitely in with a chance of knocking Madrid out of Europe’s most prestigious prize.