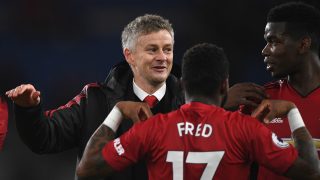 The Norwegian was immediately tasked with unifying the dressing room, getting Romelu Lukaku back scoring goals, encouraging Paul Pogba to showcase his best and to allow Marcus Rashford express himself again.

While those feats have been quickly achieved, Solskjaer must now move on to his next set of jobs, and one of those chores is to get new signing Fred performing at a higher level. José Mourinho’s summer signing cost £52 million, as reported by the Daily Mail, and he started in midfield alongside Andreas Pereira and Scott McTominay on Saturday, failing to impress.

It wasn’t the first time this season that Fred’s performance was deemed below par. The Brazilian looks to rush the ball away from his feet, a bit like Victor Lindelof last season, and needs to relax before picking out better passes.

Fred arrived at Old Trafford as United’s fourth most expensive signing ever, so there’s a high level of expectation hanging over his name, but with help from Solskjaer he can improve.

The baby-faced assassin has had a golden touch since returning to United. Watching Pogba perform the way he has in recent weeks – before picking up a knock against Newcastle – has been truly enjoyable, but it must continue between now and the end of the season if we’ve any chance of finishing in the top four.

While it’s only right to be critical of Fred’s displays thus far, the Brazil international was not given a fair run in the team under Mourinho, the man who signed him from Shakhtar Donetsk, so it almost feels as though he needs a completely fresh start.

It’s not too late for Fred to turn things around, like Lindelof has done this season… United need a quality box-to-box midfielder – someone unafraid to get into the mix, adding even more threat to an already dangerous attacking line from deep positions.

This may take a while, but we want to see Fred kick on about become an effective starter at United.

Solskjaer has shown he can change his approach and tactics depending on the opposition at hand, and Fred will be hopeful the boss implements a system to get the best out of him in his new surroundings at Old Trafford.

Unlike Mourinho, the manager must believe in him. Otherwise it’s pointless.

“Seconds left.. Becks whipped in a perfect corner. Teddy flicked it on. The rest is history” 🗣 @ManUtd pic.twitter.com/JFGqwUHZLP