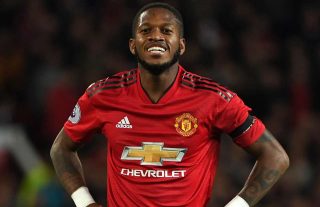 The Manchester United players are enjoying their training camp in sunny Dubai as Ole Gunnar Solskjaer puts his squad through their paces at the Nad Al Sheba Sports Complex.

Most players travelled to the Middle East on Saturday after United’s 2-0 win over Reading in the FA Cup.

However, Paul Pogba met up with the squad slightly later after being left behind to recover from a recent knock, as reported by the Daily Mail, while Fred also asked to be left out of the club’s trip because his wife, Monique Salum, is heavily pregnant.

The Brazil international has struggled since joining United in a £52 million deal from Shakhtar Donestsk, as per The Telegraph, and his most recent performance against Championship fodder Reading didn’t do much to help his case.

Though this is Fred’s debut season in England and he is bound to take some time to settle.

At times it seems he rushes the ball away from his feet similar to Victor Lindelof last season, and the Swede has since kicked on to become one of United’s most improved players this season, standing assertive in a dodgy defence which requires investment.

Moreover, a separate report from the Daily Mail pictured Fred shopping in Manchester with his wife while his United teammates trained in Dubai. The reason for his absence totally justified granted they are preparing to bring a baby into the world.

The Reds will return from Dubai prior to Sunday’s league fixture away to Tottenham. Fred is unlikely to start but Solskjaer should make it his job to get the Brazilian playing better between now and the end of the season.